Plant a tree in memory of Marnie
An environmentally-friendly option 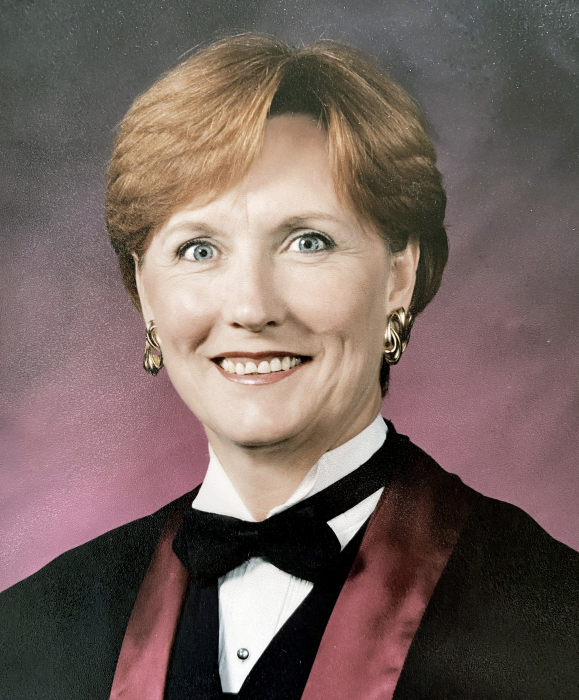 It is with great sadness we announce the peaceful passing of Marnie Susan McNiven of Winnipeg, Manitoba at home on April 9th with her husband and children by her side after a courageous battle with cancer. Marnie will be sadly missed by her beloved husband of 52 years (Norman) Douglas McNiven, and children Kristin (Mark) McRae of Mississauga, ON, Margo (Chris) Sims of St. Albert, AB, and Scott (Carol) McNiven of Winnipeg, MB, and much adored grandchildren; Finlay and Sallinger McNiven, Hume, Angus and Elise McRae and Charles and Samuel Sims as well as sisters Barbara Abrams and Patricia (David) Garner and sister-in-law Heather (Rick) Hamm. Marnie was predeceased by her parents Charles and Norma Jane Hall, sister Kathie Taft, father & mother-in-law Neil and Elizabeth McNiven, brothers-in-law Lawrence Abrams and Arni Taft, sister-in-law Donalda Kennedy and infant grandson James Sims.

Marnie grew up in Glenboro, MB where she lived until moving to Winnipeg to attend the University of Manitoba (BPE and BEd).  In 1968 Marnie married Doug McNiven and began her high school teaching career.  The couple moved to Saskatoon, SK in 1975 where their three children were born.  They lived and raised their family in the River Heights neighbourhood for 35 years.  In Saskatoon, Marnie was very involved in her community with such activities as Girl Guides, Beta Sigma Phi Sorority and was an accomplished curler; being inducted into the Saskatchewan Sports Hall of Fame in 2003.  Marnie worked for Tourism Saskatoon and after obtaining her MBA in 1999 from the University of Saskatchewan she was the Director of Admissions, U of S until her retirement in 2008.

Upon retirement Marnie and Doug returned to Winnipeg and were able to spend summers at their cottage on Lake Winnipeg where the family, including all six of their grandsons, would gather annually to share great food, play board and lawn games, have lots of laughs, carry on traditions and make wonderful new memories together.

Marnie had a generous spirit and lust for life which included a passion for cooking & baking, a love of travel which saw her take such adventurous trips like kayaking with orcas off Vancouver Island or bicycling across the South of France and an enthusiasm for the great outdoors & all kinds of sports.

Marnie has touched many lives and will be greatly missed by her family and friends.

There will be no funeral service at this time as the family will plan a celebration of Marnie’s life at a later date.  As an expression of sympathy in lieu of flowers, donations may be made to the Canadian Cancer Society, 193 Sherbrook St, Winnipeg, MB R3C 2B7 or to CancerCare Manitoba, 1160-675 McDermot Ave., Winnipeg, MB, R3E 0V9.

The family wish to thank the wonderful staff of the WRHA Palliative Care Program.

On-line condolences can be shared with the family by visiting www.willmorchapel.com.  Jamieson’s Funeral Services of Glenboro in care of arrangements.  204-827-2480

Plant a tree in memory of Marnie by clicking here.
To send flowers to Marnie's family, please visit our floral store.

A service summary is not available

Plant a tree in memory of Marnie
An environmentally-friendly option

Plant a tree in memory of Marnie

18 trees planted in memory of Marnie

There are 8 photos available in the gallery

We will miss Marnie very much.

We will all miss her.
Love from Pat, Dave, Jay and Matt

On behalf of Marnie's many colleagues and friends at the University of Saskatchewan, I wanted to let you know how surprised and saddened we all were to hear of Marnie's untimely passing. Marnie was a valued colleague, a key contributor and a respected leader during her many years at the U of S.  While many of us had not seen Marnie much since her retirement a few years ago, we have many fond memories of her and she retained a warm spot in our hearts.  We were so sorry to hear of her loss.

As a way of remembering and honouring Marnie, some of her former colleagues initiated a fundraising campaign for the Canadian Cancer Society, and have collectively raised and contributed $715 to the CCA in her memory.

Our deepest condolences to you and other members of your family.

Many condolences to the McNiven family.
Marnie was my Phys-Ed teacher at Charleswood Collegiate.
I will always remember her for being an enthusiastic and competitive coach, teacher and a caring individual...We were so blessed to have her!
Rest In Peace, Marnie!

One of my favourite teachers at charleswood collegiate.

Plant a tree in memory of Marnie